The appearance of branch sports with variegated foliage in Cistus and x Halimiocistus in recent years is a very interesting and puzzling phenomenon. As far as I have been able to ascertain there is not a single mention of variegation in Cistaceae in either botanical or horticultural literature before 1990, yet since that date many such sports have occurred and four have been available commercially in the UK.

The first to occur was x Halimiocistus sahucii ‘Ice Dancer’ at Dumbleton Nursery near Evesham in 1990 or 1991. Its narrow foliage is edged and splashed with cream in spring, but the variegation becomes less pronounced as the summer progresses. It has white flowers, but is not as vigorous or floriferous as the unvariegated original.

The second, Cistus ‘Candy Stripe’, is a sport of ‘Grayswood Pink’, which was found at a nursery in Lincolnshire in 1991. Its leaves are broadly edged with cream and complement the pink flowers rather well. 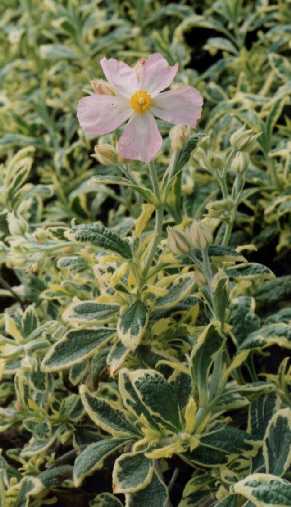 Unfortunately, although  this cultivar does very well in enriched compost in containers, it has not been so successful as a garden plant. It makes very little growth and tends to revert.

The third, ‘Golden Treasure’ is a sport of C. x argenteus ‘Peggy Sammons’ which was found at New Place Nurseries, Pulborough in 1993. This has suffered from the same weaknesses as ‘Candy Stripe’, but has the further drawback that its golden variegation does nothing to enhance its purple flowers.

Now we have a fourth new variegated cultivar, which became available commercially from 2003. Cistus × hybridus Gold Prize ‘Wyecis’ is a branch sport from Cistus x hybridus, found at Wyevale Nurseries. It has the advantage of white flowers, which assort better with the bright golden variegated foliage than pink or purple ones. The sport occurred on the clone of the hybrid that has good pink buds, a character which should further enhance the plant’s attractions. This cultivar appears more likely to stand the test of time than its predecessors.